I AM THE FIRE AND I AM THE FOREST

or Mitski as vessel, character, and creator 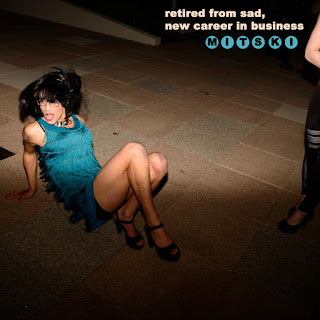 This line of thinking also completely overlooks the dynamics apparent in songs like “Goodbye, My Danish Sweetheart” and “Strawberry Blonde” which both illustrate intangible romances. The titular differences between Mitski and her romantic interest alone create a distance that informs the pain and ache of the encounter. On the latter track, she sings, “all I ever wanted was a life in your shape.” Mitski loves this person, but she is unable to fit into his life or be part of them. This could also be read as an inherent lack of compatibility—she is plainly shaped so differently that they couldn’t make it work. This theme reemerges again on Puberty 2’s “Your Best American Girl” which, in their coverage of the lead single, proved that even journalists and critics are not exempt from internalizing the same ideas.
Mitski is habitually distinguished by media and press as an anomaly among the surplus of her cis straight, white male contemporaries. She is subversive because she is surrounded by people who make it more obvious that she can never truly partake in their stories or follow in their footsteps. In the same vein, Mitski’s music is reported on like reactionary declarations to forces working against her. Such was the case for “Your Best American Girl,” a song that received critical acclaim from just about every outlet one could get their music news from, and remains a favorite on best of lists from Pitchfork (7th!), Billboard and NPR.
The song launches with Mitski’s resonant bass, swaying with the tenderness of her words (“But big spoon, you have so much to do / And I have nothing ahead of me”). The instrumentation swells softer as Mitski sings, “Don’t wait for me, I can’t come,” but the song erupts all at once in a swirl of noise and distortion. It cannibalizes itself, almost; no amount of overdrive can come close to the pain of being powerless in love, but Mitski comes close. By the end of the chorus, she arrives content as the person she came to be, and heartbroken at the loss of her partner because of it: “Your mother wouldn’t approve of how my mother raised me / But I do, I think I do / And you’re an all-American boy / I guess I couldn’t help trying to be your American girl.” The difference between them was just something that Mitski was not able to overcome.
In The Misreading of Mitski, Jia Tolentino describes the reception of “Your Best American Girl” near to that of a “political statement.” “Mitski was catapulting a boulder into the moldy walls of our national bigotry!” she writes. Critics and reporters collectively heard the track as an anthem for women of the music industry, a defiant middle finger to the people in power who consistently snub them. For a following that has steadily pointed out the so-called links between Mitski’s music and real life, they wholly missed the mark. Mitski countered this mayhem with a short Facebook post (on an account that, as of December 2020, is inactive), stating:

A lot of reviews have agreed on a narrative that she wrote this song to stick it to 'the white boy indie rock world'! But I wasn't thinking about any of that when I was writing it, I wasn't trying to send a message. I was in love. I loved somebody so much, but I also realized I can never be what would fit into their life.

She criticizes this reaction again in a Trevor Noah interview, calling it out for being “so gendered.” Even Mitski realizes that her stardom has its limits, that her reception hinges on what Tolentino designates as “lasting preconceptions about women artists.” They believe her to be authentic in her music, which makes her more relatable. But for this relationship to continue, she needs to shed her identity as an Asian woman artist and become the audience’s vessel. Mitski continues, saying:

I don’t think I would get as many critiques where people say my music is confessional or raw if I wasn’t who I am. And I think there’s so much effort in like, taking away my authority or autonomy over my own music. [...] For some reason, people really need to imagine me as some sort of vessel – vessel for emotion or vehicle for music, instead of the creator.

However, if this attitude towards artists is necessary and uncompromisable, Mitski will be repeatedly forced into a corner that takes for granted an integral part of the way she asserts herself as an Asian woman artist—and invalidates it. If an Asian woman’s expression of identity is rejected by her own fanbase, what happens to the Asian women who are fans too? How will you face them, relate to them, or be their ally?
It’s possible that Mitski is simply masking as a “confessionalist” and creating meticulous songs for a specific audience. But this speculation hardly ever takes into account what actual intent Mitski has conveyed to the audience, publicly. In conversation with Matthew Schnipper of Pitchfork, Mitski gives out a well-kept secret: “[...] a lot of my songs are just about music and trying to pursue it, and not feeling loved by it. A lot of the ‘yous’ in my songs are abstract ideas about music.” Like what many geniuses of rock music’s past have explored, music can simultaneously be the medium and the message. Mitski is the maker and nothing more. She affirms that slyly, under the dreamy, Western jingle of Be the Cowboy’s “Come Into the Water”: “Maybe I'm the same as all those men / Writing songs of all they're dreaming.”
©Alex Ramos and the CCA Arts Review
Email ThisBlogThis!Share to TwitterShare to FacebookShare to Pinterest

A Project of the undergraduate Writing & Literature Program at CCA